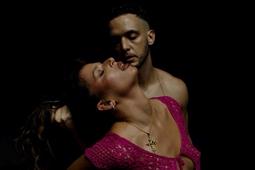 The Spanish rapper C. Tangana and the Argentine-Spanish singer Nathy Peluso played the part of “Ateo”, which makes an oda to the bachata, a genre that I study very present in the mind of C. Tangana during the making of his recent album ” El Madrileño”, to decontextualize traditional elements and cross them with an urban sound and an experimental setting.

C. Tangana felt that “Nathy was the perfect companion for eso”, and that “they share an origin of rap and are sonically exploring other styles of traditional music”.

“When Pucho sent me the song for the first time,” recalls Nathy Peluso, “I immediately felt it was a classic. And when we worked together in the studio, I re-confirmed that same sensation. It’s a project with a wonderful universe, and a fantastic video. that is really a work of art, and a very interesting theme that appeals to all of us. ¡Que viva el romanticismo!”

The official video of “Ateo” is also the debut as director of C. Tangana, a vision shared with the visual collaborators of Little Spain. “I’ve always been fascinated by cinematographic direction and I’m a big movie fan”, says C. Tangana. “I have always worked on the creativity of my videos, but this is the first time I direct them. More than the aesthetics, the look portrays how I feel, showing the song and the themes of the lyrics”.

C. Tangana explored the bachata for the first time in “Tú Me Dejaste de Querer”, a theme that counts with 139 million views on YouTube, incorporating elements of the genre and inspired by his trip to the Dominican Republic, which he brought him to know about leyendas like Luis Segura, con quien también hopes to be able to collaborate sometime.

Both artists were also recognized last week with nominations in the main categories of the 22nd annual Latin GRAMMY® award, C. Tangana with 5 nominations and Nathy Peluso with 4 nominations.

C. Tangana (@c.tangana) is a visionary artist who has received praise (see abajo) from the creators of media trends for his sound innovation and fusion of genres. They are one of the main nominated artists (5) in this year’s Latin GRAMMYs. The third album by composer, singer and rapper Español and his great work ‘El Madrileño’ – scuchalo here – certifies his status as leader of inventive pop – debuting in the #1 spotify and coronado global list as #1 in Spain for 9 consecutive weeks. His album ‘El Madrileño’ received nominations for the Latin GRAMMYs in the categories of “Album del Año” and “Mejor Ingeniería de Grabación para an Álbum”. “Te Olvidaste” (Ft. Omar Apollo) is nominated for “Grabación Del Año”. “Nominao” (Ft. Jorge Drexler) and “Te Olvidaste” (Ft. Omar Apollo) are nominated for “Mejor Canción Alternativa” and “Hong Kong” (Ft. Andres Calamaro) is nominated for “Mejor Canción Pop/Rock”. The NPR ‘Tiny Desk’ by C. Tangana — miralo here — has achieved more reproductions than any other in 2021 apart from Justin Bieber. Camila Cabello tells Zane Lowe that the presentation, that shows the beauty of a dessert, inspired her most recent song/video/work of art.

“El Madrileño” mixes traditional Spanish and Latin American styles, including rock, with electronic sounds and rhythms. He has taken it from being the biggest rapper in Spain to one of his biggest pop stars.” – THE NEW YORK TIMES

“C. Tangana is changing the game… a masterpiece based on conciliation: tradition and pop intertwine in a concept album that redefines and reconfigures music in Spanish”. – ROLLING STONE

“The project delves into the roots of the essential sounds of Madrid, but also incorporates visual images and a sense of tradition (each one of the project’s covers is a Goya-like painting) that seeks to be undiscovered, to be detached and to flow listening” – BILLBOARD

“Vibra with community energy highlighting the talent of the Latin landscapes… from the Mexican regional to Spanish flamenco, C. Tangana opens the house and the same time has a bridge between the borders of Latin music. It is building a community of intercultural collaboration based on a unifying love for the language and tradition, making it clear that it has the intention of giving everyone a seat at the table.” – NPR

The composer, singer, Argentine rapper, Nathy Peluso (@NathyPeluso) continues to empower women to change the male gaze – “If you need agallas to devour me… If you need a real body to handle me…”, he says in his last sentence “Mafiosa ” Accompanied by a music video inspired by salsa filmed in the streets of Madrid, where Nathy recently led an extensive tour with tickets sold out all over the country. In the official video, she is dressed in costumes by Dior, VETEMENTS, Balenciaga, Versace and more. The influential fashion Instagram @diet_prada I put the soundtrack of her Jacquemus in Paris show with the theme “Celebre” by Nathy Peluso from her debut album “Calambre”, which was released the same week when it received nominations for the Latin GRAMMY awards ®.

Nathy Peluso obtained 4 additional nominations to the Latin GRAMMY® this year that cover gender categories and demonstrate her status as a leading artist in the international music scene, including the ‘Best alternative music album’ for her album “Calambre”, which she accumulates 145 million reproductions. ; “Best rap / hip hop song” by “Sana Sana”, a series celebrated by fanatics with 240 million reproductions, “Mejor alternative song” by “Agarrate” and “Best fusion / urban interpretation” by a song that evolved viral this year, “NATHY PELUSO: BZRP MUSIC SESSIONS, VOL.36”. with Bizarrap, which reigns in 164 million arroyos.

Earlier this spring, Nathy performed her hit “Crime” in Stephen Colbert’s Play At Home series. The song now has more than 85 million reproductions. Included Cardi B published a video of her singing and dancing the song, and this clip has 18 million hits! Aim for Nathy to perform the R&B jam “Buenos Aires” as part of the virtual conference SXSW 2021. This weekend, Nathy will perform at the legendary Montreaux en Suiza Jazz Festival. Confidentially, it is scheduled for Coachella 2022 (the alignment is not announced).

Nathy’s acclaimed debut album ‘Calambre’ appeared in The New York Times. The Guardian highlighted it as “One To Watch”: “The Argentine singer with a large number of followers on social networks embraces traditional Latin sounds, rap and R&B”. The FADER escribió: “The album is full of brilliant points … ‘Sugga’ has instrumental adjustments from former Prince collaborator Michael B. Nelson, and ‘Llámame’ is totally understated”. CLASH says “Nathy Peluso is unstoppable. Meet the revolutionary Latin pop that walks its own path…” This summer, Spotify featured Nathy Peluso in its global program of emerging artists, RADAR, followed by the launch of its own mini -RADAR biographical doc.