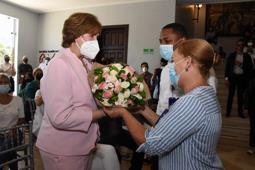 In an emotional event held in the lobby of the headquarters of the entity, the Ministry of Culture recognized the enormous work carried out by Carmen Heredia de Guerrero as Minister of Culture, during the period 2020-2021 of the government of President Luis Abinader.

The activity counted with the presence of vice-ministers, directors, servants of the institution and distinguished personalities linked to the cultural and diplomatic field, among those who were found in the ambassador of Mexico in the country, Carlos Peñafiel Soto; the members of the National Council of Culture, Julia Castillo, Darío Solano and José del Castillo; outstanding dancers Marylouise Ventura Garrido and Monika Despradel, and art critic and researcher Marianne de Tolentino.

The act, whose expenses were paid in a personal capacity by the departmental directors of the institution, began with a few words in charge of Geo Ripley, in charge of the Department of Inmaterial Cultural Heritage, which highlighted the large area of ​​Heredia in the cultural and approving sphere the occasion for the delivery of the pin of the cathedral of Santiago de Compostela, of the Order of the Camino de Santiago, due to the efforts made so that during his administration the beginning of the interinstitutional relations with this entity will be channeled.

Afterwards, the vice-minister of Cultural Heritage, Gamal Michelén, addressed those present, who pointed out that Carmen Heredia has been a cultural worker for decades, working for the benefit of the country. “Ella is leaving a legacy. Ella can now, without being at the crossroads of her life, stop, look back and decide to herself: ‘Yo no he lived in vano; I had an existential reason in my ephemeral step through the land, because this life is brief, but it is not brief when the leyenda fall”.

“Your life had a meaning, and it is more important; y will continue teniendo. May Dios bless you,” exclaimed Michelén.

For his part, the vice-minister of Creativity and Artistic Training, Giovanny Cruz, referring to the management of Heredia and its contributions to the Dominican cultural development, emphasized: “One thing in the past, and it is forgotten. Y Carmen Heredia will be remembered by her own right, by the stamp, in the moment in this ministerial administration: it is a day of life of service to culture”.

The official added that Carmen Heredia was employed as a secretariat and position to occupy the highest positions in the cultural sector. He indicated that when the organ of a major hierarchy in the cultural sphere of the country was the Directorate General of Fine Arts, she held the position of director general of that institution.

“In all this tradition, what his life has meant has been a legendary, radical series, and will only remain there for ever. It is not a decree that determines it; eso es todo life”, points out Cruz.

The activity continued with the delivery of a manifest to the Heredia minister by the teacher and renowned dancer Patricia Ascuasiasti, representing the artists, cultural managers and workers of the Ministry of Culture, who recognize the excellence of her management as minister, So as its dedication to the promotion of the arts in the country, it is leading its institutions from the scope of public communication, but always for the benefit of Dominican society.

Later, the servants of the MINC Benito Melenciano and Amada Mora delivered a bunch of flowers to Heredia under the name of the large family of the Ministry of Culture.

In addressing those present, Minister Carmen Heredia expressed her emotion and gratitude for the act and urged everyone to continue working for the culture. “I’m here, I’ll be in another place mañana, but I’ll always be with us. Through mis criticism, in some way ustedes transcenderán, because, as Giovanny Cruz says, ‘what is written is what falls’. These moments have to be immortalized”.

It would work further: “For me it has been a true honor to participate with all of us. I want to thank all this wonderful team that has accompanied us today. You will always count on me, because, as our motto has been, “we are culture!”

During the event, artistic presentations will be held by lyrical singers Otilio Pérez, Glemner Pérez and Paola González. In the same way, the act counted with the participation of the Dominican Company of Artists with Disability, the dancers Laura de Los Santos and Sofia Almonte, and the cultural manager and television producer Juan Merán.

The minister will now occupy the position of advisor to the Executive Power in matters of Cultural Policies, with assistance at the National Palace. In replacement of Heredia, she was appointed Minister of Culture by decree of the Communicator Milagros Germán, who will assume the position on the 10th of October of the current year.

Myriam Hernández: “Every who uses their nets as a desee”

Sr Jaquem, the young man who apuesta a la comedy

From the last butaca: “El irlandés”, another look

In Santiago, comments are made: Jarabacoa follows fashion