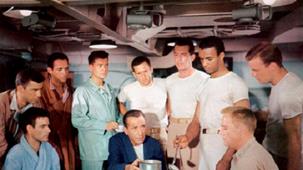 The riot is a rebellion against the established order. Such rebellion implies disobedience to the chain of command.

It constitutes the crime as mutiny. This turmoil is extremely dangerous, if only
it carries out in a bouquet of a Naval Armada, in the middle of a war.

But this riot manages to be consummated before a latent event (a cyclone); for which reason it was possible that, as it came from an atmospheric phenomenon, the entire crew could perish due to the lack of action of the commander, thus achieving the right moment for this uprising.

Here comes the big question: Was it necessary in the face of a catastrophic event and a supposedly “insane” commander to cause a riot?

This entire event is outlined with stupendous performances in the film “El motín del Caine” from the year 1954 and directed by Edward Dmytryk.

The plot is located in a dragamine (Bouque) named USS Caine, in full glory
of the Second World War.

The new commander Queeg (Humphrey Bogart) assumes the command of the ship, characterized by implementing an iron discipline, in which the crew’s command in the accustomed estaba.

This new chief begins to have very strict observations and to punish marines for very simple conduct, giving rise to Lieutenant Keefer (Fred McMurray) to piece together a conspiracy plot, adducing that Commander Queeg poses delirium or mental envy.

At a determined moment, before the fury of the winds of a powerful huracán, the commander Queeg pier de la cordura and wisdom, and the second officer in command, named Maryk (Van Johnson), is instigated by Keefer to reveal his superior and this is confined in your cabin.

The mutiny has been consummated. For this reason, all will have to respond to a Council of War raised by their former commander.

The conduct and circumstances in which Commander Queeg was lost for a lapse of
time, the sense of the moment, it takes us to ask itself about the actions of its subordinates
they were correct.

Ahora bien, so that the second officer commanding Maryk takes the decision of the riot, hub of having the someone who takes up the work of diablillo as an instigating entity as it always happens.

That persona was the lieutenant Keefer, a kind of pseudo-intellectual who started from the very beginning to incite rebellion and try to convince his comrades to take it
action of rebellion. But this guy is a cowardly and a liar man who falls well
I barely stopped at the end of the plot, as it were the individuals who were hiding under a double moral facade.

The film outlines the very behavior of each individual, reflecting on them the various contradictions without having someone who could be a balanced entity between them all.

The performances are very good on the part of the secondary cast; but la soberbia interpretative demonstration by Humphrey Bogaert is extraordinary that still today makes reference to la misma.

The director Edward Dymtryk manages to concatenate each shot to give this algid moment, both in the power of command and in the moment of judgment to create maximum tension, and thus to catch the spectator in his seats under a very successful suspension scheme.

For what we recommend it for this new generation that you may have seen in the past, and for what I could see earlier, it is worth seeing it again.

1) The film is an adaptation of the novel by Herman Wouk, whose theatrical version was a success in 1953 with Henry Fonda in the role of the neurotic captain.

2) This is the favorite film of actor Maurice Joseph Micklewhite, from which he adopted part of his name as last name. We are referring to actor Michael Caine.

3) Despite the environment of the war, the film that Edward Dmytryk directed is not about a battle between someone and someone else, enemies appearing to those facing the allied marina.

This, more bien, is a history of a moral order, and what puts in the scene is the legitimacy of some officers in the mutiny.

Some of the curiosities were taken from the Filmesdeculto.blogspot.com page

Duration: 124 minutes
Director Edward Dmytryk: Ukrainian filmmaker included in the black list during the bruja hunting in the era of McCarthyism.

Aesthetic retouching on the face: possible mission for Tom Cruise

Carlos Silver does not laugh! For the fourth time go to the Guinness record now from Spain