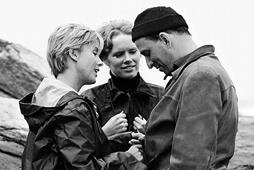 This masterpiece was directed by one of the greatest filmmakers in the world, Ingmar Bergman, his premiere was in 1966 and starred by his muses who have made many of his films: Bibi Andersson and Liv Ullmann.

The first one embodies a nurse who tries to create a bond so that the person who plays Liv Ullmann can regain her voice after having decided to call voluntarily through her last theatrical function.

The title refers to the masks of the theater in ancient Greece, where the face of the mask represents a point of character; mientras behind hides another face that comes siendo la other face.

It is the social mask that we often represent, where each person has a different face in the face of different situations in our lives.

The film starts in a very special way. In the shows, when a cinematographic projector is perceived and after that, unconnected images appear, throwing us in the development of the plot with a complex theme.

Elizabeth Vogler (Liv Ullmann) is a renowned theater actress who decides to be mute and is admitted to a hospital where they carry out all kinds of analysis, concluding that she is biologically completely healthy.

In the hospital room, Elizabeth observes on the television, images of the Vietnam War, a monk performing a suicide in a kind style, and in the image this profound restlessness of the horror and the cruel of life appears. One will ask himself: is it el miedo a la vida?

To get rid of their voluntary silence, they send a nurse named Alma (Bibi Andersson) and both go to a house near the playa, so that in full solitude, the nurse can break Elizabeth’s silence.

Here a relationship will be established where the nurse reports her life to the actress, resulting in a symbiosis. Over time, the feelings are working as if both were on one sole.

Elizabeth without deciding a word turns out to be more strong than Alma; by which a kind of personality vampirism is produced. Alma accounts for all his intimate life and more allá; because she feels familiar with Elizabeth, because she admires her as an actress and project in her the “Yo Ideal” that constitutes this model of being collectively accepted. It is for this that Elizabeth is absorbing the personality of Alma.

In the writing of Jaume Cardona on his virtual page called cine and psychology, he expresses the following about this vampirization process: “This consideration of the other as part of the same thing that the Soul has to be vampirized. Elizabeth’s need, her need to reconcile herself through the other, her dependent on this and her denying silence precipitates her into the abysses of her loss of identity. En cierta manera, the silence of Elizabeth and the abyss of La Cosa lacaniana, lose yourself in su más allá.

After Elizabeth’s rejection, Alma enters an extraneous world where reality and fantasy are difficult to discern. Hence it is difficult to recognize what happens, it occurs in reality in the fantasy of Soul; si bien, and as Jung would say, it finally constitutes its psychological reality.”

Under this scheme, Alma is confused and adopts Elizabeth’s role for a moment, and is part of her masquerade on diverse positions that we often take in our other lives before society. Bergman as a good knower of the human psyche, the plasma in its films from which he deepens Yo.

The film ends when Alma makes it possible to rebuild her life and returns to her everyday world and rejects Elizabeth as another Yo. Then, the images will appear as the beginning until the projector is erased.

“Persona” is a complex film, worthy of analysis on the problematic of personal identity; but above all, it is a singular work. As singular is the title, hence, through the cinematographic language, Bergman speaks to us and manifests his concerns.
A true joy of world cinematography.

1) The end of the persona viene of the Greek classical theater “by” “sona” is the mask of the actor through the one that gets us his voice.

2) Bergman wrote the script when he spent a long period of convalescence in a hospital because of stress.

3) Ingmar Bergman had reached the climax of his inspiration. It was manifested in 1990 when a book entitled “Imágenes” was published, which expresses it below: “I have the feeling that in Persona he has reached the limit of mischievous possibilities. That in full liberty, he rozated the secrets without words that only cinematography is able to bring out the light”.

4) It is considered one of the best films in history where the theme of identity and recognition through the other comes to the fore.

“The Batman”, “The Flash” and “Black Adam” star in the DC Fandome