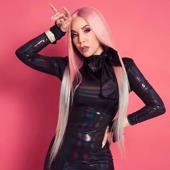 Ivy Queen, Mia Nygren, Mónica Vélez and Mayna Nevarez will be the women awarded this year with the title Leading Ladies of Entertainment, a special recognition given in the week of the Latin Grammys.

The Academia Latina de la Grabación announces these awards honored in the fifth edition of the award, which in other editions were for artists such as Selena Gómez and Lila Downs and journalists such as María Elena Salinas.

“This is a program created five years ago to grant recognition to professional and socially conscious women in the arts and entertainment sector that has important contributions and inspired the next generation of leading women,” explained the Latin Academy in a statement.

The award ceremony will be held on November 16, during a virtual ceremony, while the Latin Grammy gala will be held on the following days and in face-to-face format in Las Vegas (USA).

Among the laureates is Ivy Queen, one of the first nominated in the category best urban music album in the history of the Latin Grammys and whose lyrics were outstanding for female power, highlighted the organization.

Also appears Mia Nygren, general director of Spotify for Latin America and responsible for promoting some of the changes that have ended up defining the current music business.

Asimism, Mayna Nevarez will be recognized as one of the most important publicists in the industry, with a catalog that includes Daddy Yankee, Carlos Vives and Natti Natasha.

“These examples give us the opportunity to reflect on the challenges that professionals face in the surroundings of the arts and entertainment today. It is evident that there is still gender inequality in the industry,” said the delegate Academy Latin, Manuel Abud.

The Latin Grammy will be given on November 18 with Camilo, Juan Luis Guerra and C Tangana as the most nominated artists.