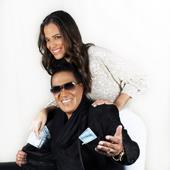 With the aim of supporting the new talent, Kinito Méndez launches the merengue “The white and the black”, a collaboration with the young singer Nahia, a young man who is incurring in the merengue.

It is a theme of his authorship, as well as the musical arrangements, as it deals with the history of some of the “popis” who have pictures alongside luxury cars, high-end cars, good houses and apartments, but only for to make the others believe that it is bien, when the realities that are in the pockets.

This is done with the intention of getting women and having friends, which is what is lived in these days and from there it continues telling a story of youth vanity.

It is precisely a merengue with novel musical colors and a jocular story about how the youth behaves through social networks.

Kinito is looking for a young talent to interpret this meringue and when he was in Nahia’s Hablaron studio, he is getting ready to debut with his meringue project.

While listening to her singing, he decided for her, as a way of supporting her and making the idea of ​​recording with new talents a reality, so that when she launches herself into the public, she knows it.

“The merengue needs that the new generation to get and when the escuché to sing the order to fetch. Nahia is a young girl who sings beautiful, from Santiago Rodríguez,” expressed Kinito Méndez.

“El blando y el negro” is on all digital platforms, even your video, created by Multimedia Global. Kinito is also promoting it in radio stations that place meringue and international markets such as Colombia, Panama, Costa Rica and others.