Samsung is the master of foldable smartphones. The South Korean manufacturer has now released its 3rd generation folding phones, the Galaxy Z Flip 3 and Galaxy Z Fold 3. In addition, the company is working on many other form factors, as Samsung Display showed earlier this year a particularly advanced multi-foldable smartphone as well as a pull-out smartphone. Samsung also seems to want to release its first rollable smartphone next year.

The company also regularly applies for patents for the most diverse designs. Last month, the progressive manufacturer was awarded a patent for a ‘Galaxy Flex Note’ foldable smartphone, with a wrap-around display and an ingenious stylus dock.

To visualize this special smartphone design, graphic designer Technizo Concept has made a series of 3D product renders in collaboration with LetsGoDigital. The images are based on Samsung Display’s patent images. However, the camera system has been revised – we will come back to this in detail later in this publication. 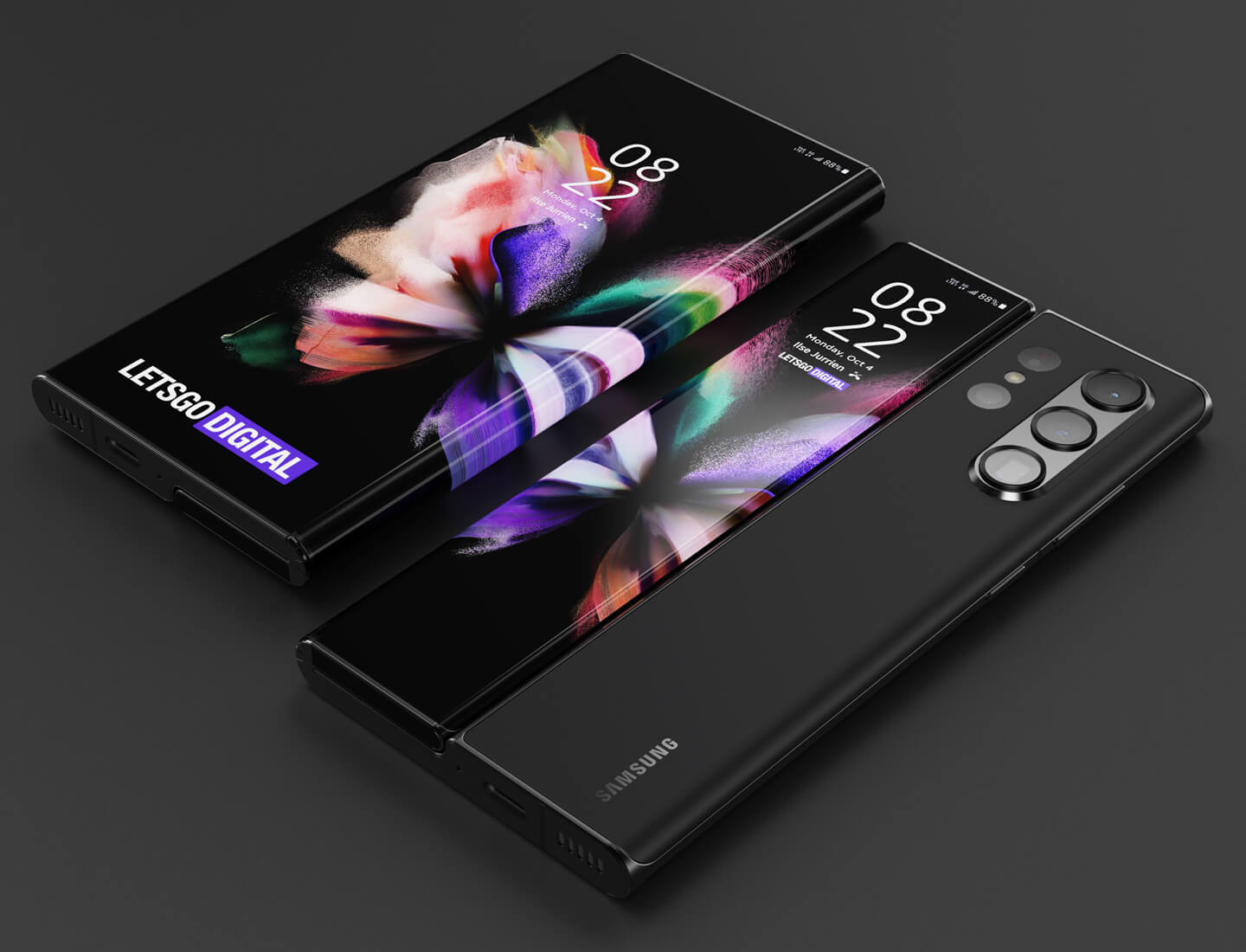 In the unfolded position, this device offers a similar screen size as the Samsung Galaxy Z Fold 3. Thanks to the large screen size, this phone is excellent for working productively.

However, there is no separate front display available. Instead, Samsung uses a wrap-around display with the patented model, which can be wrapped around the housing. In its most compact form, the entire front, the right side and half of the back consists of screen surface.

It is therefore not an inwardly flexible screen, as is the case with the current Z Fold series of smartphones. The YouTube animation video from Technizo Concept below shows the folding phone from Samsung Display in detail.

There are a number of advantages and disadvantages to this design. Starting with the drawbacks, since it is an outward folding screen, it is more likely to be damaged if the device is carried in a bag or pocket. It will also not be so easy to design a case for such a wrap-around phone.

However, there are also advantages, because because there are no two housings on top of each other when folded, this smartphone will be both lighter and thinner than the Fold. In addition, this solution is most likely cheaper to produce, which will logically also result in a lower selling price.

This design has another distinct advantage. Samsung has seen an opportunity to incorporate an S Pen stylus dock into the design. So that we have renamed this phone the ‘Galaxy Z Fold Note’. 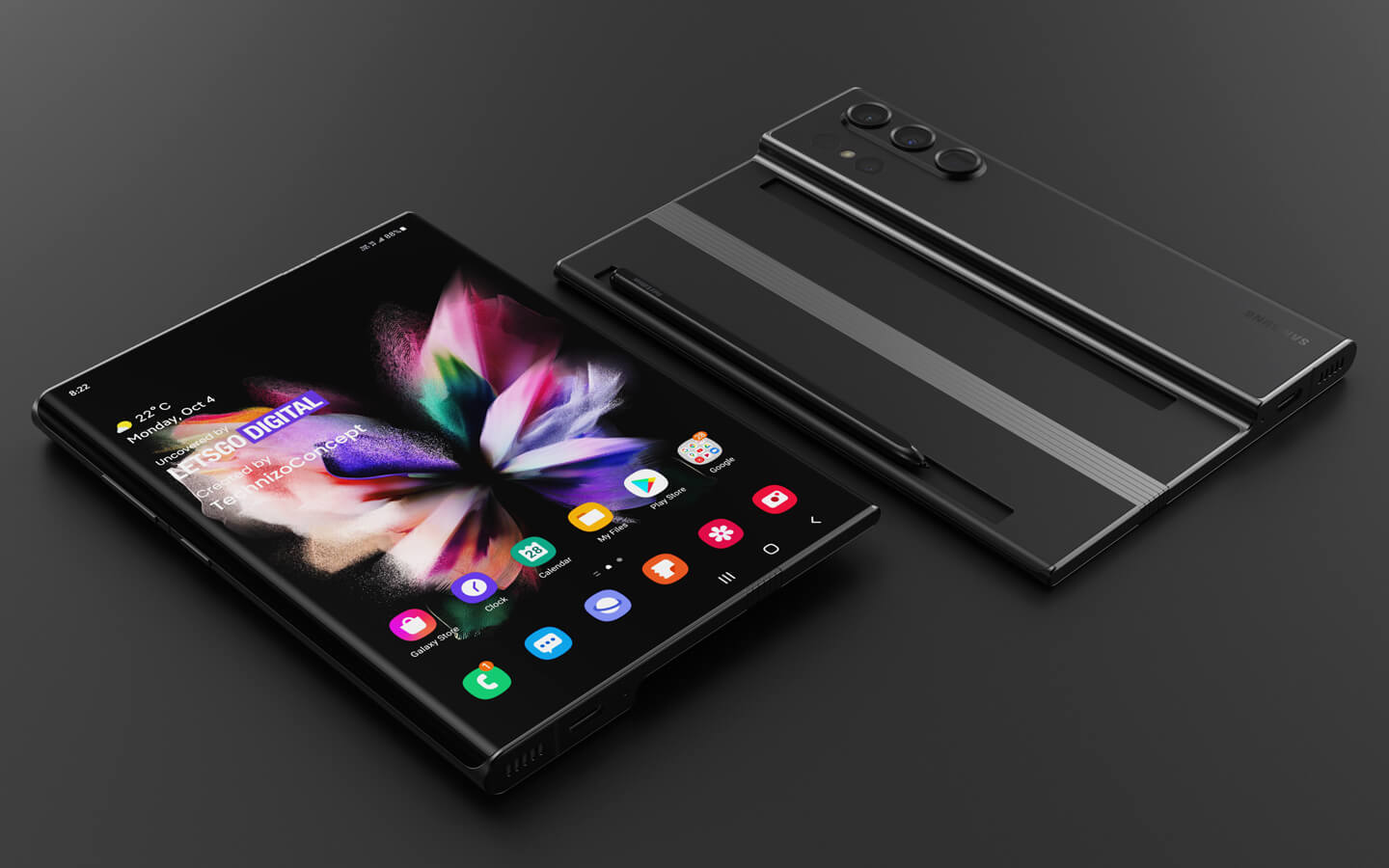 It is not an S Pen compartment, as we are used to from the Galaxy Note model series. Instead, Samsung has made two cutouts on the back of the wrap-around display. The S Pen can be clamped here when the phone is folded. Thanks to magnets, the S Pen will not just fall out of the compartment when you unfold this Note foldable smartphone.

It is an ideal solution, you can easily store the stylus without the need for additional accessories. This also reduces the chance that you can lose the pen. Moreover, no valuable space in the housing is lost in this way.

The Galaxy Z Fold 3 is Samsung’s first folding phone with S Pen support. It is expected that Samsung will eventually release more phone models with a flexible screen and S Pen. Finally, the advantages of a stylus pen are even more apparent with a large screen surface. 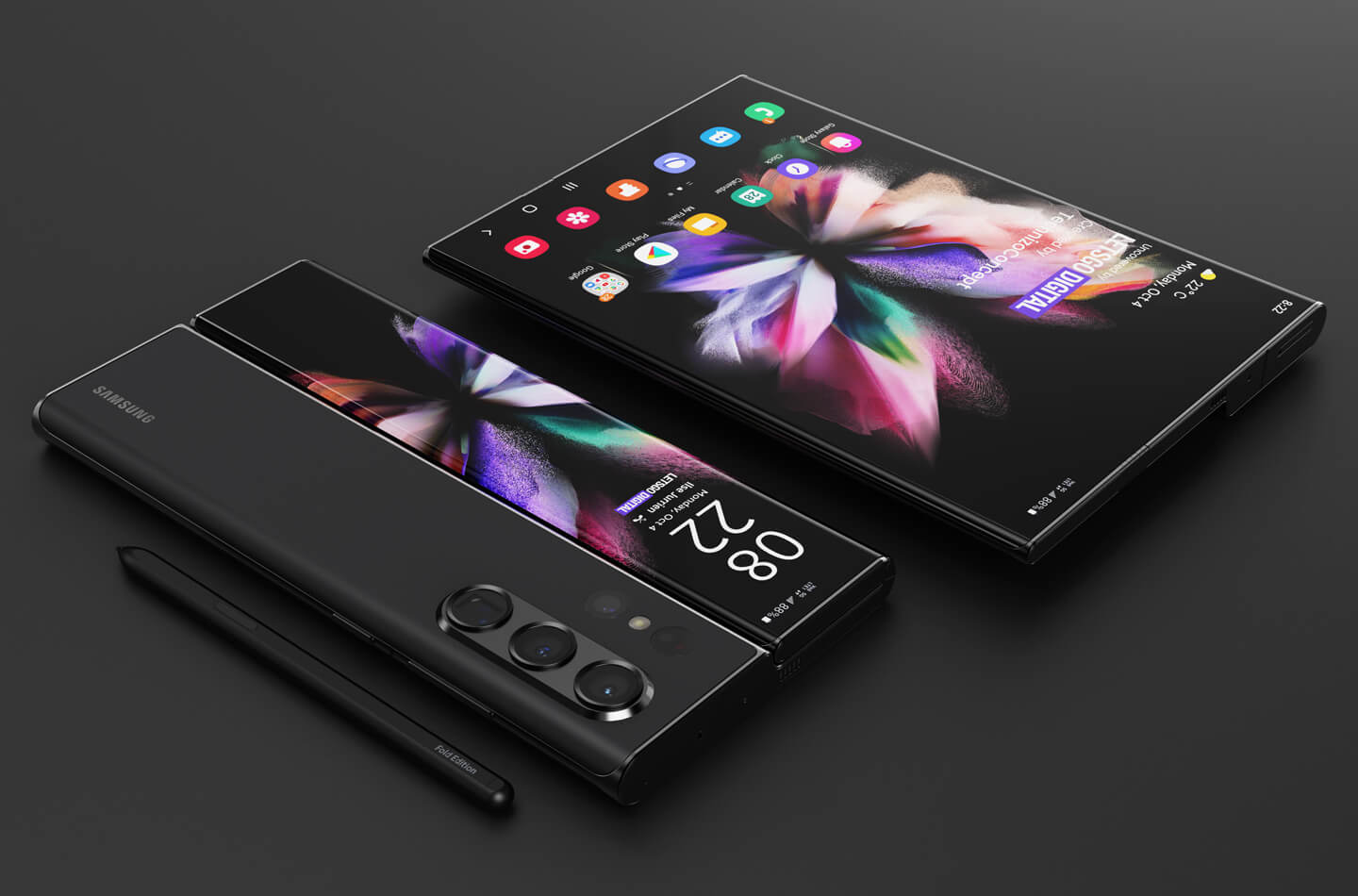 As for the cameras, two variants are shown in the patent images. One with an under display camera, the other contains a double punch-hole camera placed in the top right of the flexible screen. When the phone is unfolded, this dual camera can be used as a selfie camera for making video calls. When folded, the dual camera moves to the back, allowing you to take regular photo and video recordings.

It is a relatively cheap solution, after all, the patented device only has 2 cameras. If Samsung wants to launch this model as a cheap alternative to the Z Fold, it can be a suitable solution. However, for the product renders, Technizo Concept has chosen to place a triple camera on the back – similar to the Galaxy Z Fold 3.

In addition, the designer has placed an under-display camera under the flexible screen – as we also know from the latest Samsung Fold. Although the first generation UDC leaves something to be desired, both in terms of image quality and visibility of the camera system, it is expected that this camera technology will be further developed in the coming years to set the new standard. 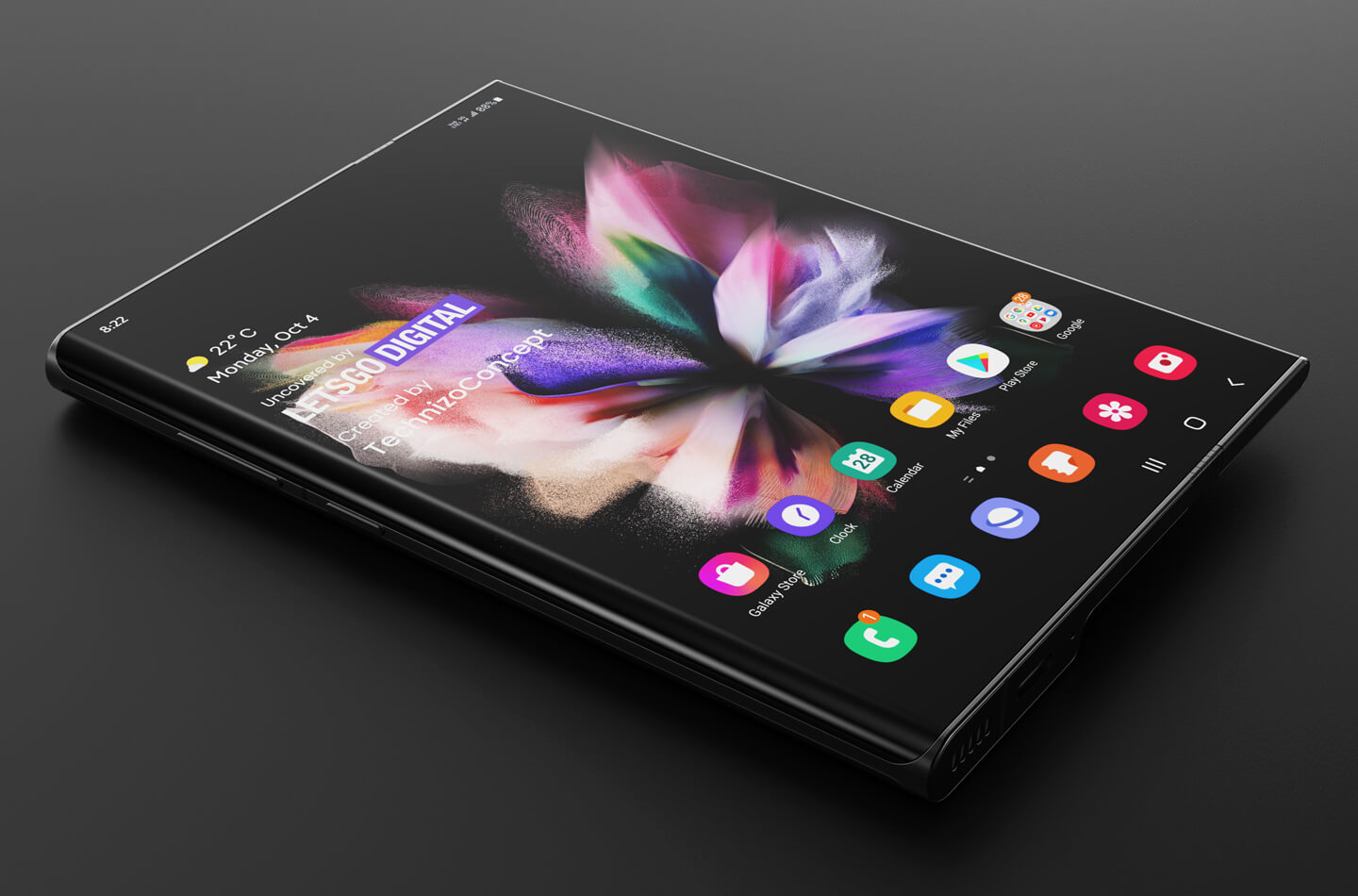 It is also good to realize that this design is patented by Samsung Display. Samsung’s display division does not only supply display panels to Samsung Electronics. In the coming period, more foldable smartphones will be released with a Samsung display panel.

The Google Pixel Fold, as well as the foldables from Oppo, Vivo and Xiaomi, will feature a foldable panel from Samsung Display, according to display analyst Ross Young. Thus, in theory, this smartphone design could also be used by another smartphone brand.

In that regard, Samsung’s design is much more advanced. Finally, the Samsung Note foldable smartphone is a lot more versatile, because the device can be folded into a tablet format. In combination with the S Pen, you can work very productively with this phone.

The first sales results of the Samsung Galaxy Z Flip 3 and Z Fold 3 are very positive. Pre-order sales were better than ever before. The clamshell model in particular is immensely popular, the favorable starting price of €1,050 will undoubtedly be the reason for this.

The positive sales figures of the Galaxy Z series even seem to be partly the reason that Samsung is canceling the release of the Galaxy S21 FE, which was initially expected in August this year. The Galaxy Note 21 will also shine this year with its absence. This makes the Samsung Galaxy S21 series the only high-end smartphone line-up that the company has released this year – apart from the two new foldables. 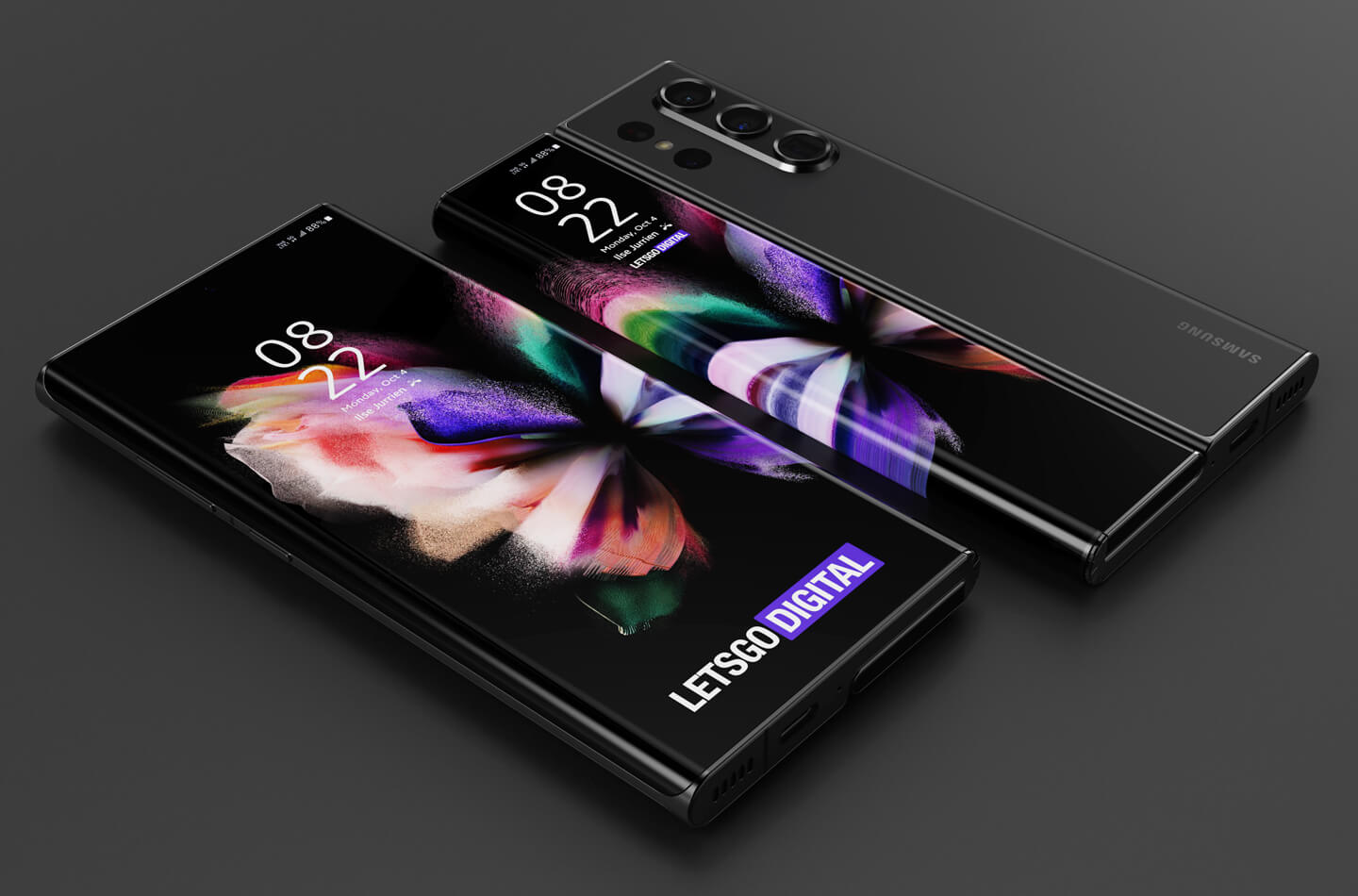 Subsequently, Samsung will undoubtedly fully focus on a new series of folding phones. Logically, both a new Flip and Fold will be released. In addition, it is not inconceivable that new models will appear next year.

Other brands are also expected to introduce one or more folding telephones in the coming period. Google may be the first, the American tech giant is organizing a launch event for Android 12 and the Pixel 6 series later this month. It is quite possible that the Pixel Fold will be introduced simultaneously.

Vivo and Oppo are also expected to release their first foldable this year. Competitor Xiaomi seems to want to release its second folding phone soon, the Mi Mix Flip – after the Mi Mix Fold was released earlier this year. Huawei has now also released several models, which will undoubtedly be followed up again. With so many new folding phones, this new product category will quickly increase in popularity. Although Apple doesn’t seem to follow until 2023 with a foldable iPhone. 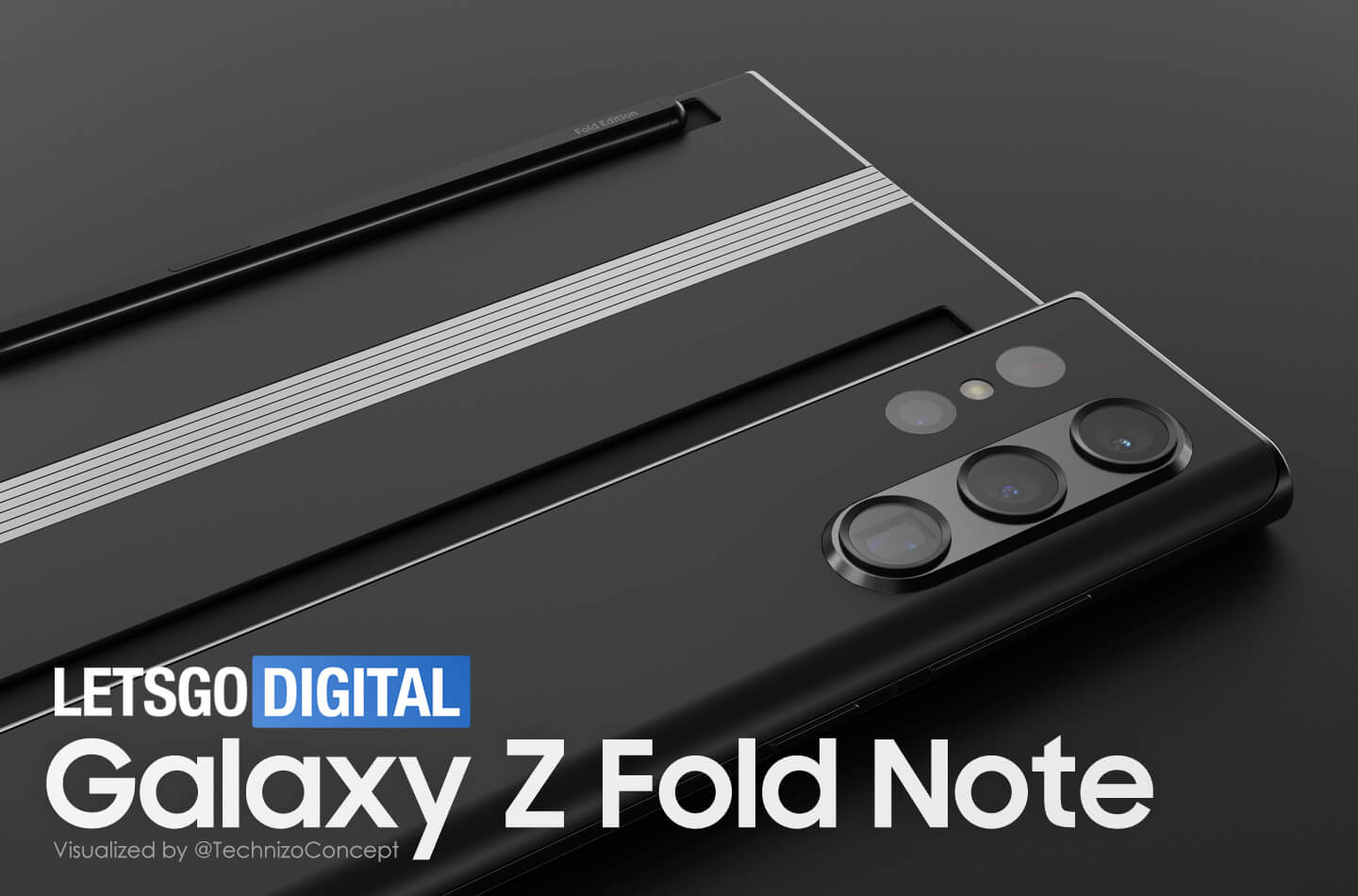 Note to publishers : The Samsung Galaxy Fold Note product renders in this publication are created by Technizo Concept in collaboration with LetsGoDigital. The 3D renders are for illustrative purposes only. This product is not for sale. You can use the copyrighted images for your own website, YouTube and/or social media channels, please be so respectful to include a clickable source link into your publication.