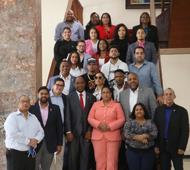 La Comisión Permanente Medios de Comunicación of the Chamber of Deputies received representatives of urban music and content creators in radio and digital programs with the objective of listening to their ideas to improve the language that incites violence through music and them means of communication.

The Commission was chaired by the deputy Elpidio Báez, who manifested the interests of the Chamber of Deputies to sustain an exchange of opinions and consultations with the sectors involved to seek solutions to this problem that manifests itself in all musical genres, but mainly in them urban music.

Báez clarified that the deputies in the search for censorship planned to put up an obstacle, but to seek a way to establish new regulations that would prevent this music from reaching a filter to the vulnerable sectors of society.

Junior Sosa, director of broadcaster KQ94.5, says that for a few years, efforts have been made in this direction, but the influence of music from other countries is in addition to the fact that young people consume music from the radio, digital bell, The problem has been added, as these platforms are often impossible to regulate.

While DJ Jhonny is pleased that the content is not previously censored because music is the expression of the pueblos, and the urban is the expression of the barriada and the same reflects what is lived in the barrios. I considered that it is the responsibility of the artists to typify their content for adults, but it is the duty of the priests to verify the content that comes to their children.

Rap interpreter Toxic Crow say it’s time to see the positive side of urban music. The “dembowseros” generate important amounts of money and are the sum of the Dominican Republic in tax matters.

Toxic Crow I believe it is the Government’s responsibility to ensure that the established rules are complied with, but at the same time encourage the interpreters to create content with clean letters for all consumption. He added that the authorities want to regulate the content of the Dominicans, while the boricuas pass without regulation at all.

An option devised by Toxic Crow to improve the lyrics of the urban genre is to put seals to prevent exit in the passports of artists who pursue this practice, which in turn would make it impossible for these singers to carry out international tours.

I also put as an example that YouTube has an option called Plus18 which consists of directing the content to persons over 18 years old whenever and when requested. It will ensure that all digital platforms have controls that can be applied and that they cannot be used for the contents that are sanctioned.

Luymy Corporán, announcer, showed that artists of the urban genre have been abandoned and that there is a need to create bad opportunities for young people, take them into account and improve education. Corporán joins the initiative to economically encourage artists to work with clean lyrics and thus counteract music with negative content.

While La Insuperable considered that it is everyone’s responsibility to seek solutions that do not affect urban singers, but instead to plant alternatives that encourage artists to improve their lyrics.

Hansel Lantigua, producer of the digital program “Seasoning to the famous”, I argue that there is no regime of consequence that sanctions those who violate the rules for a long time. He confessed to feeling indignant and frustrated to see the freedom in the media and not to see that these persons were sanctioned.

On his side, Ovandy Camilo, announcer and defender of rhythm and clean lyrics, suggested that international cooperation laws be created to regulate content directly from digital platforms.

“So as there is an agreement for extradition, there can be an agreement to control the content of the digital platforms”, added Camilo.

The producer of the Bajo Mundo program, Capricornio, showed that the line between the classes of the high society. He denounced that there are no guarantees from the State to improve the conditions of those who are trying to reinsert themselves in society.

Capricorn says that a young man who sings dembow is less of a delinquent. Recognize that artists should improve and content, but should be seen as allies, not enemies.

Deputy Bolivar Valera said that public policies must be created to encourage creativity, and proposed the Ley Naranja initiative, which seeks to create art schools in the barrios, with funds to reward good initiatives.

Betty Gerónimo considered that as legislators they should commit to improving education from childhood onwards, so that children can follow this example. Ask urban residents to find solutions and work together.

Elpidio Báez, president of the commission, committed himself to the other legislators to investigate the cases set by those invited to this meeting to prevent the contents for adults from reaching minors.

Báez also said that they will continue to meet with all the sectors involved in order to find a definitive solution without negatively affecting the artists, but strengthening respect for the norms and the good customs of the Dominican pueblo.

The legislator announced that the next invited will be the ministers of Culture, Milagros Germán, and of Education, Roberto Fulcar.

C. Tangana and Nathy Peluso unite in a bachata