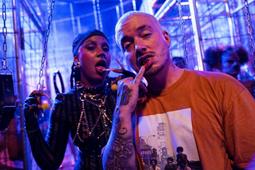 The vicepresident and canciller of Colombia, Marta Lucia Ramírez, spoke against the “Perra” theme of the Colombian singer J Balvin and the Dominican Tokischa.

Ramírez and the presidential councilor for Equidad de la Mujer, Gheidy Gallo broadcast a letter showing her stance on the importance of defending the rights of women in this country.

They scathingly rejected the song ‘Perra’ and its video clip because they transgress the rights of women and affect their dignity.

According to Colombian media, the letter mentions that the video shows Afro-descendant women with dog ears, tied with chains from the sky and dragged along the floor as if they were animals or slaves.

“As this is the case, the lyrics of the song have direct and open sexist, racist, sexist and misogynist expressions that violate the rights of women, comparing them to an animal that must be mastered and abused, with expressions that are not worth it repeat”, says the statement signed by Marta Lucía Ramírez.

Asimismo, together with Gheidy Gallo, said: “We publicly invite singer J Balvin and the music and record industry to sign a pact that includes several commitments for the promotion of the rights of women in music, a scenario in which we hope to tell with the Universidad Externado de Colombia and other universities whose work has been highlighted in the theme”.

This is not the first time that the subject breaks out in controversy, a few weeks ago fanatical mismos criticized the controversial subject that has 10 million solo reproductions on YouTube.

The video shows women disguised as dogs, suggestive dances and multiple sexual references, as well as phrases such as “I’m a perra callejera con la popola de raza”, among others, highlighted El Heraldo.

Carlos Silver does not laugh! For the fourth time go to the Guinness record now from Spain